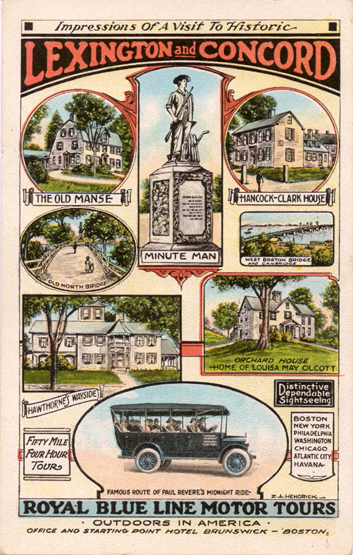 I love transportation cards! Trains, planes, cars, ships, you name it! This card is one of my fav's not only because of it's topic, but because I think it's a beautiful card!...and after all, beauty IS in the eye of the beholder! 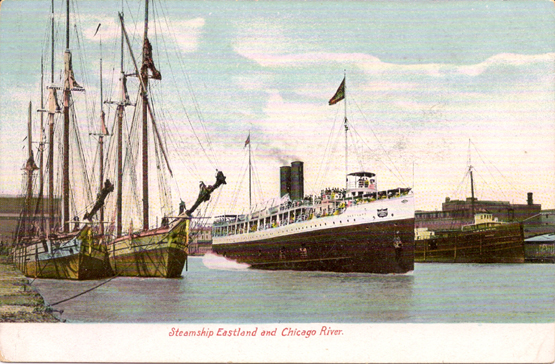 I've run across another Eastland Steamer postcard that I've added to my collection. The Eastland was a steamer that has quite a history. This card was printed in Germany by the Hugh C. Leighton Co. (1906-1909)  of Portland, Maine. If you haven't seen my Eastland page, here is the kink" 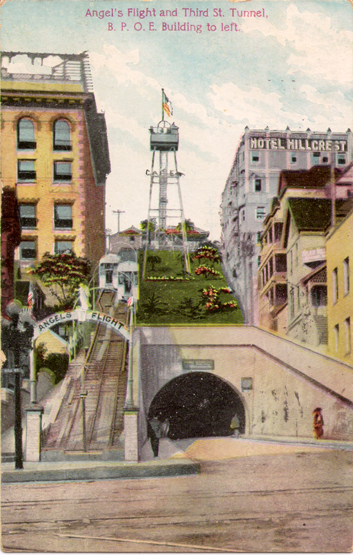 The original Angels Flight Railway location, with tracks connecting  and , operated from 1901 until it was closed in 1969, when its site was cleared for redevelopment. The entire railway was dismantled and put into storage (SEE!, we don't destroy all that is old in L.A!) The second Angels Flight location opened nearby to the south in 1996. It was re-closed in 2001, after a fatal accident, and took nine years to commence operations again, on March 15, 2010. Some more info and nice pictures at: http://www.picturetrail.com/sfx/album/view/23044083 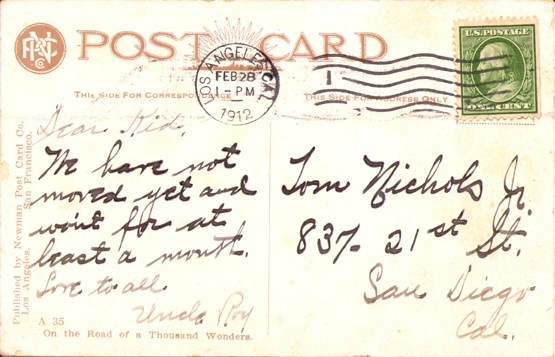 Found these original tickets in a shoe-box at a postcard show. 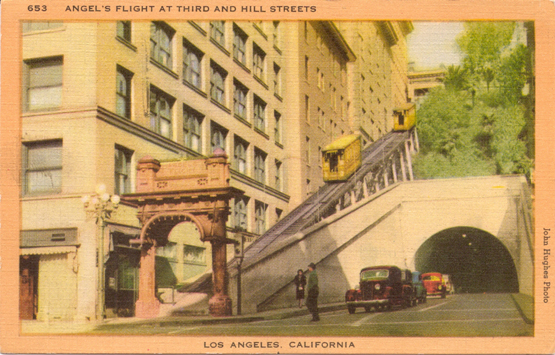 The photo below is NOT a postcard, but it is a neat perspective of what was then and what is now. Photo is from the L.A.Times photo archieve, "Framework"
http://framework.latimes.com/2011/01/07/angels-flights-first-opening/#/0 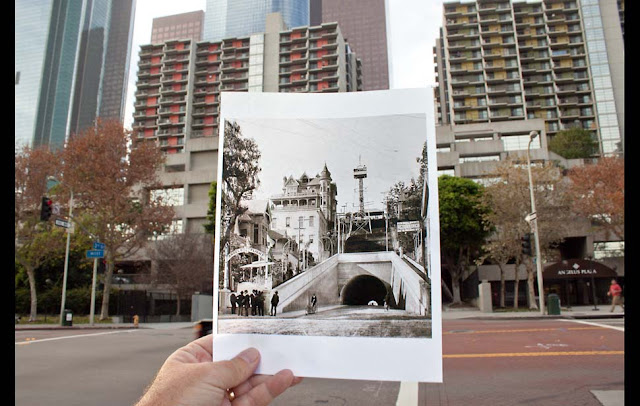 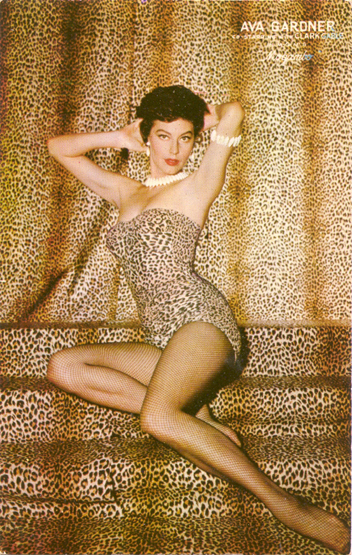 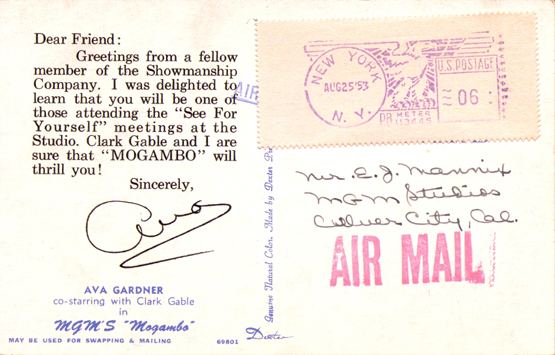 There are a few of things that I think are cool about this 1953 besides Ava Gardner in a leopard skin outfit. One is that the card is addressed to E.J Mannix. Mr. Mannix was a producer at MGM, eventually working his way up to general manager and vice-president of Metro-Goldwyn-Mayer. He allegedly had connections to gangs and the underworld; gossip purported that he murdered his first wife (in a make-believe high speed car crash) in 1937 He was also rumored to be complicit in cover-ups involving the deaths of film producer Paul Bern and Superman actor George Reeves, with whom his second wife Toni Mannix had a long open affair. Mannix was never formally charged as Reeves's death was ruled a suicide (as was Bern's), and no credible evidence has ever been cited to confirm the rumors. However, the 2006 film Hollywoodland (in which he was portrayed by Bob Hoskins) speculates on three theories, one of which is that one or both of the Mannix's might have caused Reeves' death. Another "cool" thing on the card is the reference to the "Showmanship Company". This is a  the name that Howard Hughes's RKO Radio Pictures studio had started calling itself. Howard and Ava were romantically involved in the late 40's and early 50's. Last but not least is the comment in the bottom left corner of the back of the card. "May be used for swapping & mailing" I'm not sure why that needed to be said... 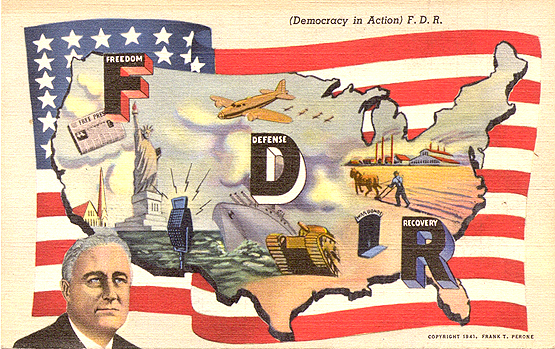 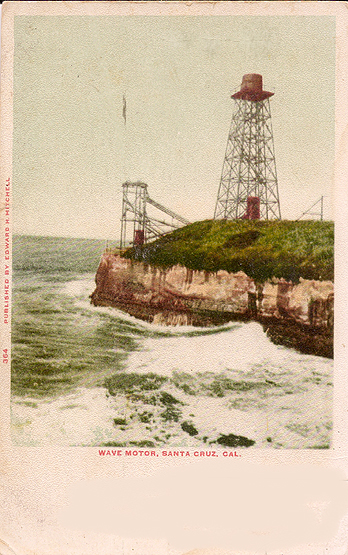 It seems like an early Mitchell postcard. The layout almost looks more like a . Never had heard of the "wave motor" until seeing this card. An interesting, but failed concept.

The inventors were a pair of brothers named William and John Armstrong. The wave motor, an oscillating water column, was built inside the cliff. They had dug a thirty-five by six foot hole into the side of the cliff that ran to a level below low tide. From there another tunnel connected it with the ocean. The purpose was to get water up to the the scenic dirt road on the bluff that needed to be kept damp because of the dust that was kicked up by tourists..

Some more info on the wave motor here:
http://www.haskey.com/johnh/wave_motor/index.html

The wave motor was dismantled in 1910 because of improved street paving that made it unnecessary to water down the roads. One of the tunnels still remains in the cliffs to this day. 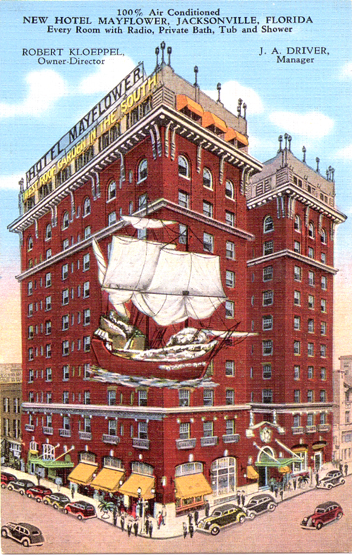 First and foremost, I love the "Mayflower" ship hovering around it's namesake hotel! Probably has trouble finding a parking space though! As usual, I like to look for some background info on postcards. While I did find out that the Mayflower was originally the Mason and that the hotel was demolished in 1978 (all together now: Awwww), I couldn't find much else, but I did find this obituary:

“Irene Ann Byram, 99, passed away January 16th, 2012. Irene, known as Nonie by her close family and friends, was born on May 22, 1912 in Detroit MI. Irene moved to  with her husband and children in 1935 from Wauchula Fl. She was employed by the Mayflower hotel for over 30 years. In 1944 she was sworn in as the first female bartender in the state of  by Governor Spessard Holland” 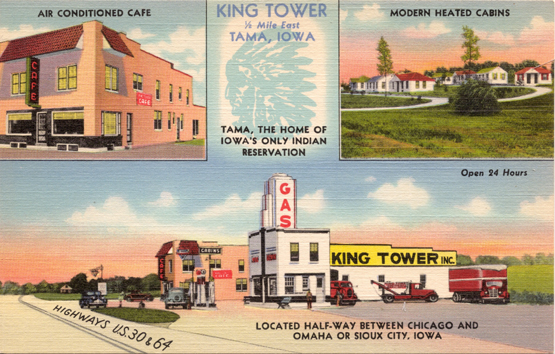 Gas, Food, Lodging AND a Garage! Just a neat looking linen in my book! 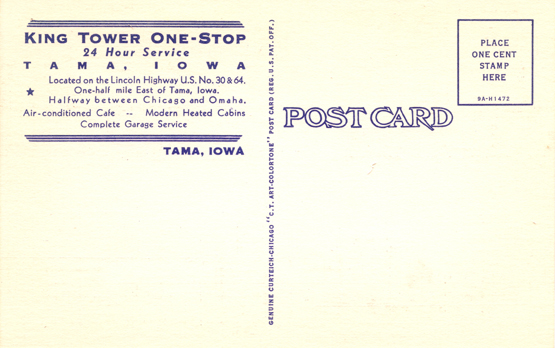 I have to admit that when I looked at this card, my first thought was, "Where are the old pigeons?" Well I did a little homework and found that Frenchman Alexander Valle built Pigeon Ranch in the early 1820's. The ranch got its name because of the "pigeon-English" (broken-English) that Valle spoke. The ranch became a very important site along the Santa Fe Trail, serving as a stagecoach stop, U.S. Post Office and a trading post. In March of 1862, Pigeon Ranch and the surrounding area was the site of the biggest and bloodiest battle of the Civil War in the Southwest.

In 1924, Thomas "Tommie" Greer bought the Pigeon Ranch and turned it into a tourist attraction. Greer, being the "showman" that he was, claimed that the well on the ranch was "the oldest in the U.S.", a claim that is unfounded. He added trained bears (looks safe to me!) to the ranch to try to lure even more tourists.

By the 1940's the Tommie and his bears were gone. Today all that's left of the ranch is one building that sits precariously close to New Mexico's Hwy 50. 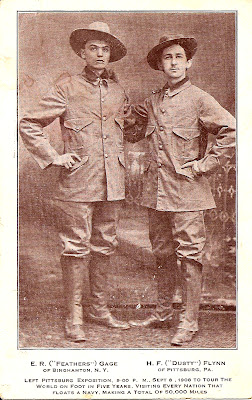 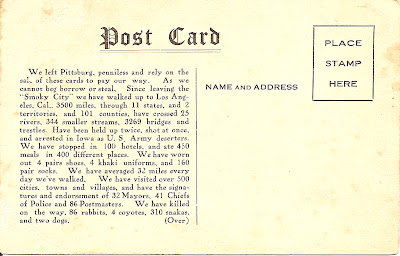 Always thought that this was such a interesting and perhaps noble travel adventure story...but according to this old newspaper clipping, I guess "Feathers" and "Dusty" weren't as noble (or as honest!) at paying their bills 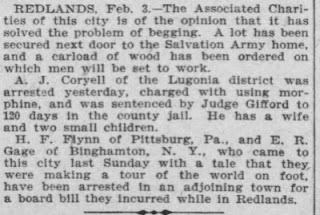 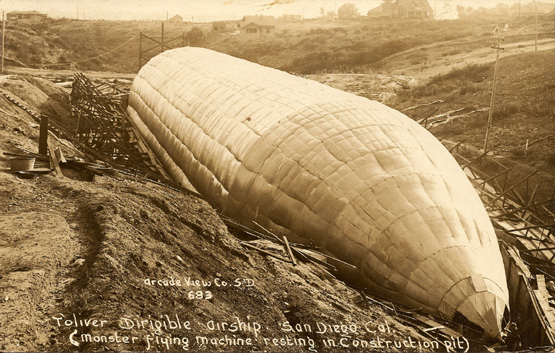 "The wonders of this ship are almost beyond any description. Few people in San Diego realize the wonders that have been accomplished during the last few months in the construction of the Toliver airship...When this ship makes its initial flight in May it will make a showing that will startle the whole world"

Interesting note: In May of 2010, the world's largest airship landed in San Diego after setting a distance record. That airship is 4 feet shorter than Toliver's. Check out the lower right hand corner of the card to get a feel for the size of the "monster flying machine"....Toliver himself perhaps?

Short story HERE about Toliver and his life...not a happy ending!

Is it my imagination or did the Asheville Post Card Company out of North Carolina produce some of  the most politically-incorrect (by today's standards) postcards of the linen era?...BTW, nice job on the skin tone...NOT! 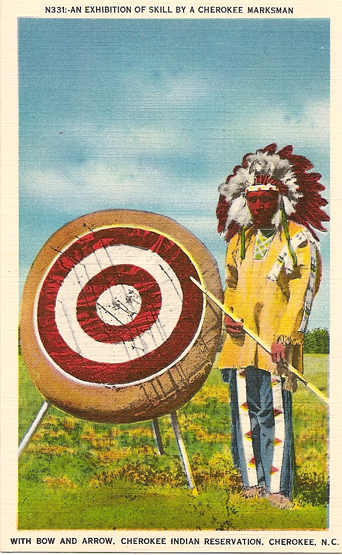 Hope you all are enjoying your 4th of July Holiday! 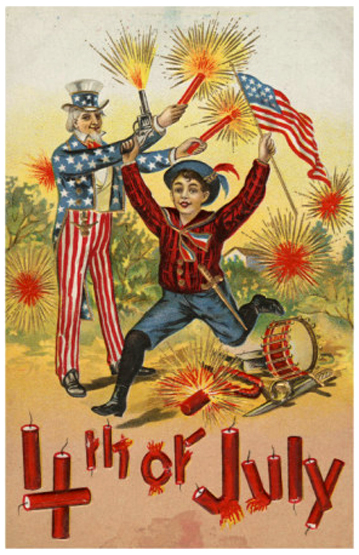 Email ThisBlogThis!Share to TwitterShare to FacebookShare to Pinterest
Labels: 4th of July, Holidays

They're a postcard, they've got airplanes and they're postmarked 1st day of Issue! It's a trifecta for me! 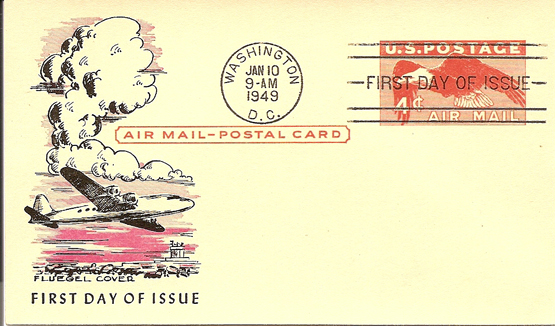 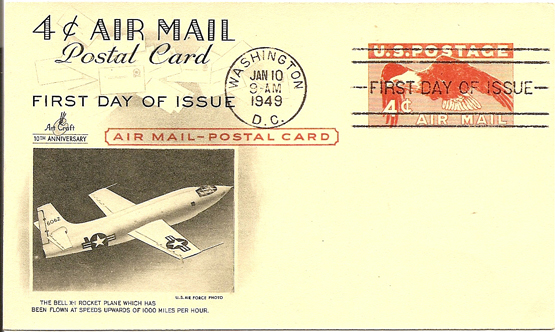 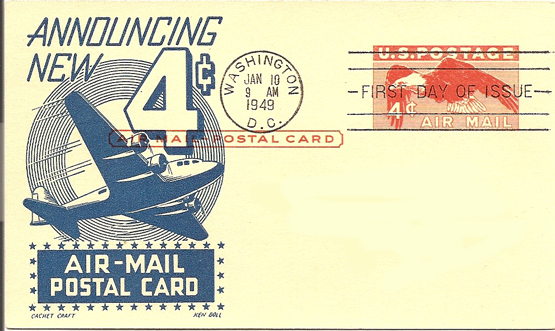