The Great Flood of 1913: Indianapolis 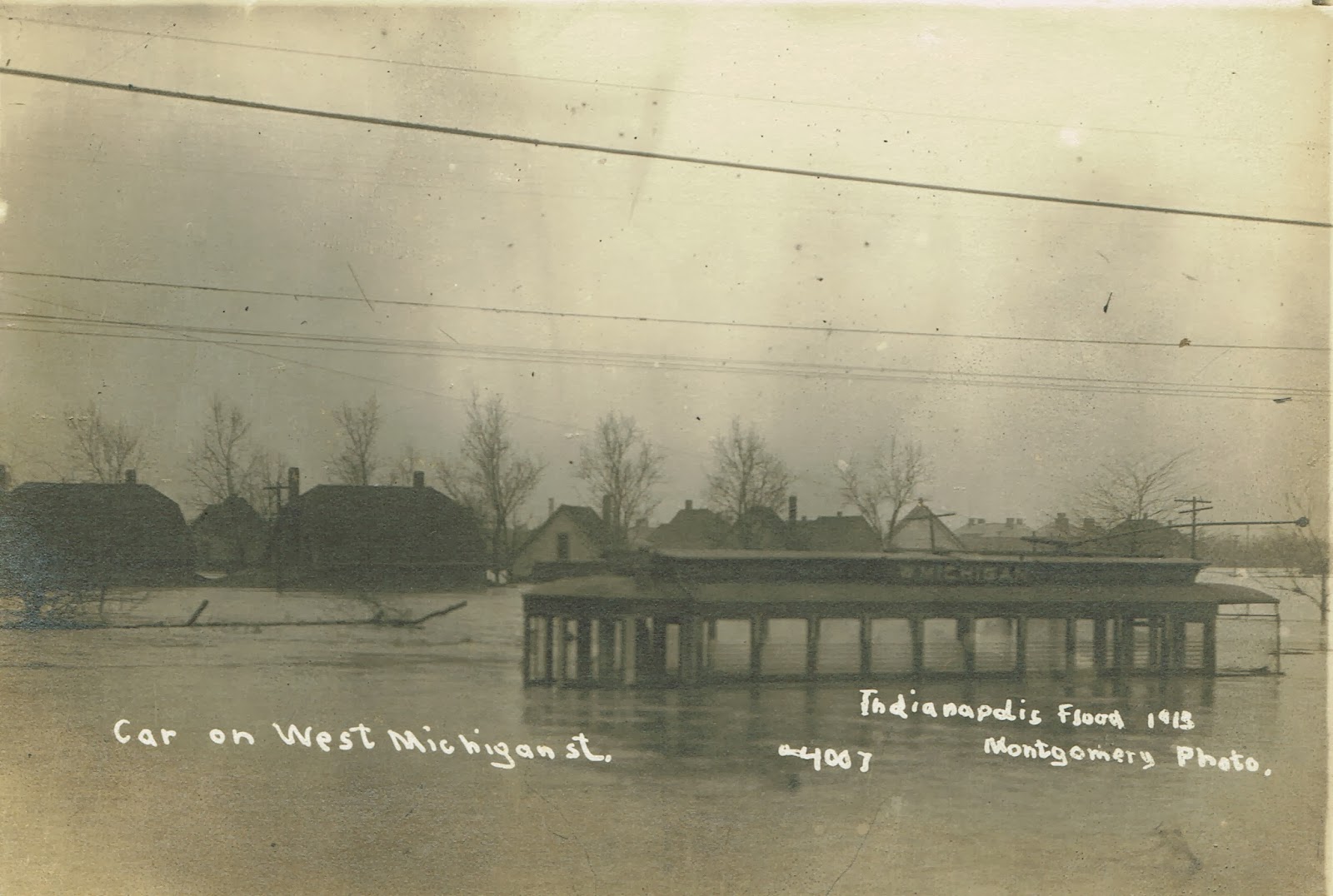 The 1913 flooding affected , , ,  and most locations along White River, the East Fork of the White,  and Whitewater rivers. Rainfall for the five-day period beginning March 23 ranged from 2 inches in Northwest Indiana to more than 11 inches in the Richmond/east-central  area.

The AZO stamp box dates this RPPC as being anywhere from 1904 to 1918. More info and a short video about the disaster is available here: 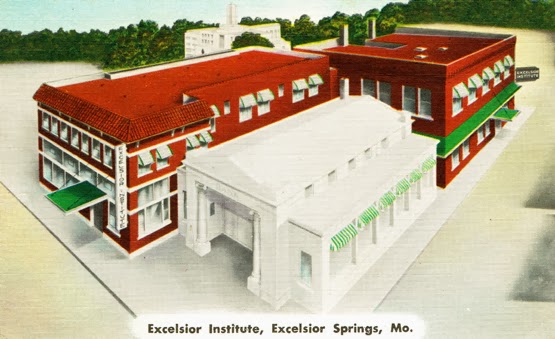 Excelsior Springs owes its existence to a natural spring that for ages gushed forth from remote depths of the earth at the edge of a pretty river near the western border of what is now , Clay County, Missouri.

I think these days they would have just "photo-shopped" the bank out of the picture rather than the attempt to use "white-out"...interesting that they still accented the banks window awnings. 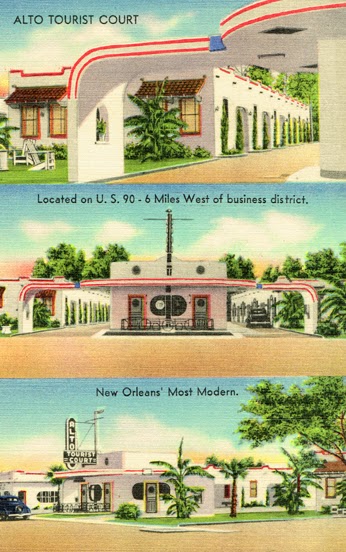 On the back: "New Orleans - America's Most Interesting City" 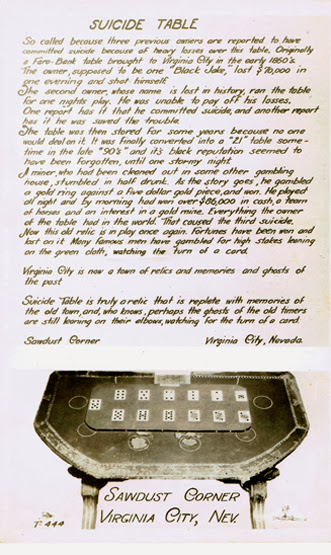 If you want to see the "Suicide Table" these days you'll need to go to the "Delta Saloon and Cafe" in Virginia City where it is presently on display and protected by a Plexiglas case. No idea why it moved venues but one might assume that suicide may have been involved...

Neither of these RPPCs is postmarked but the stamp box on the "Suicide Table" card dates it as being from the 1950's. "The Sawdust" cards stamp box is not legible. 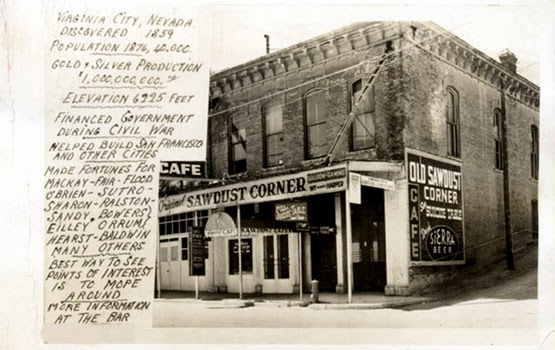 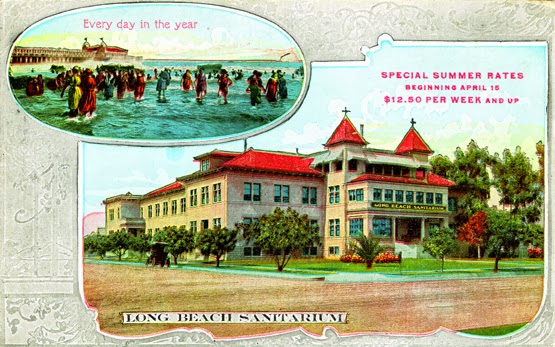 Not much room for any personal correspondence on this card! 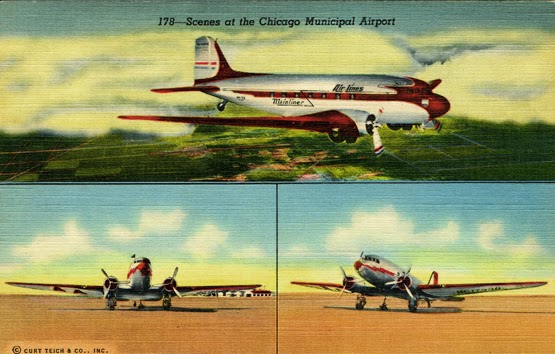 In 1926 the city leased the airport and named it on December 12, 1927. By 1928, the airport had twelve hangars and four runways, lit for night operations.


In July 1949 the airport was renamed Chicago Midway after the Battle of Midway...If I'm not mistaken, the aircraft is a Douglas DC-3.

Built in the 1920s by John Ringling, of the Ringling Brothers Circus, and his wife, Mable, the Venetian-style mansion (named Cà d'Zan, meaning "House of John" in Venetian dialect), dominates 20 acres of waterfront, accompanied by the John and Mable Ringling Museum of Art. Recently restored to its original glory, the Ringling mansion was once left a wreck with a leaky roof. 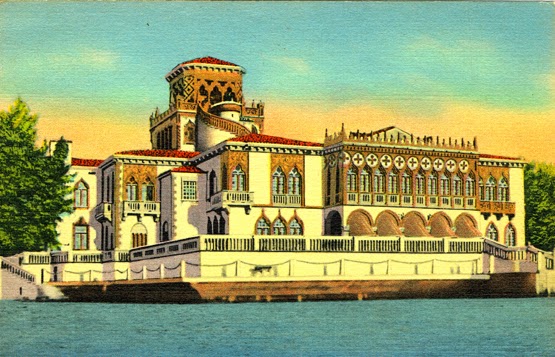 Despite his great outward success, poor investments coupled with the general downturn of the Depression, left Ringling near penniless at the time of his 1936 death. Some news reports had his bank accounts totaling a mere $311. In an effort to save his beloved home, Ringling willed the property to the state of .

By the late 1990s, the house and grounds were in a state of utter neglect.

Its depressing appearance seems to have inspired some action on the part of , which transferred the property to and provided more than $40M toward new building, renovations, and an endowment for the property. In 2002, a six-year renovation commenced, eventually costing upwards of $15M. 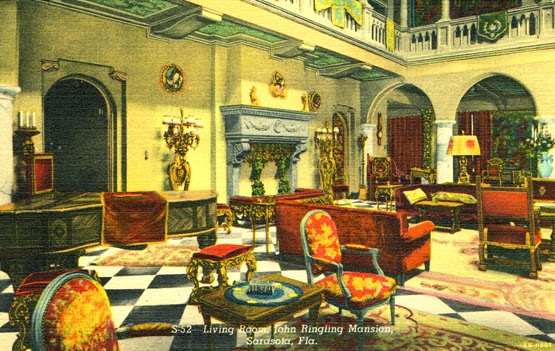 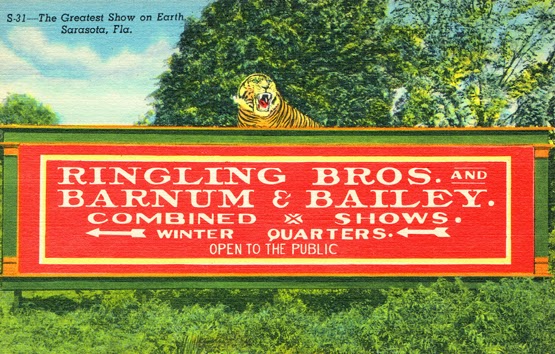 A couple of linen postcards from Sarasota, Florida - The winter quarters for "The Greatest Show on Earth"

The cards are "Genuine CurtTeich-Chicago" and were postmarked 1949. 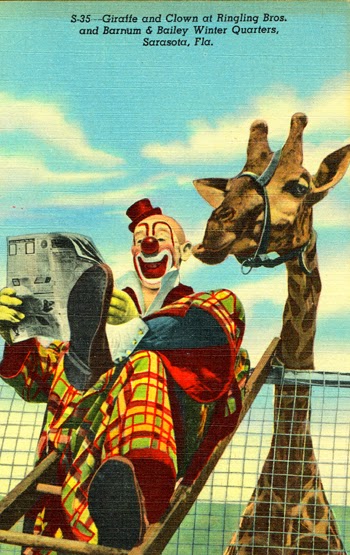 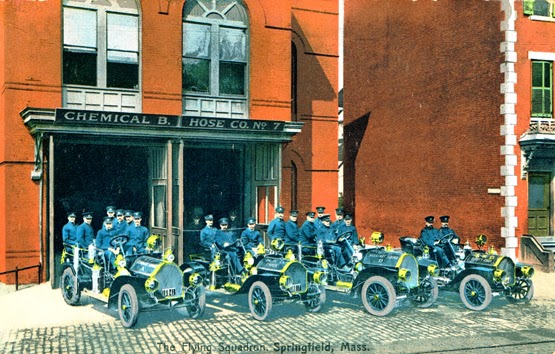 In 1906, received the first fire apparatus built by the Knox Automobile Company that was located in . By 1909, the department had 5 Knox units in operation. The photograph that was used for this postcard shows 2 chemical and hose cars operated by Squads A and B and 2 cars used by the chief and his assistant. I found this information in the book “Images of America: Springfield Firefighting” by Bert D. Johanson and Nancy B. Johanson; Assisted by Fred Rodriguez.


The first modern and “state-of-the-art” fire engine was built in 1906 by Knox Automobile Company in who later became famous for its fire trucks.

This card was printed in Germany and published by the Springfield News Company circa 1909 under the name "Poly Chrome". Their style has been described as "colors so bright and so flat that they almost resemble screen-prints." 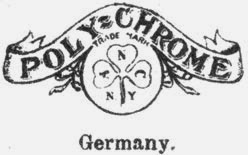 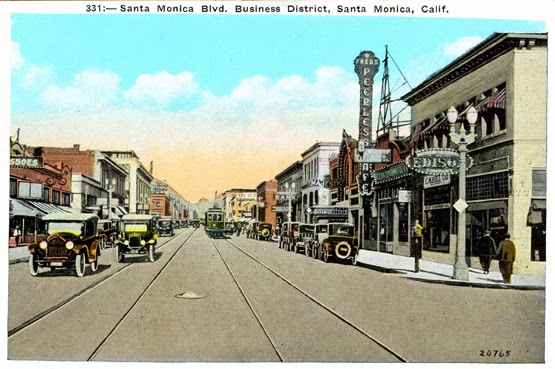 This view is looking east from the intersection of 2nd Street and Santa Monica Blvd, For those of you who know downtown Santa Monica, you can see the marque of the Majestic Theater on the right. This card is from the M. Kashower Co. who published cards from 1914-1934. This non-postally used card looks to be circa the mid 1920's 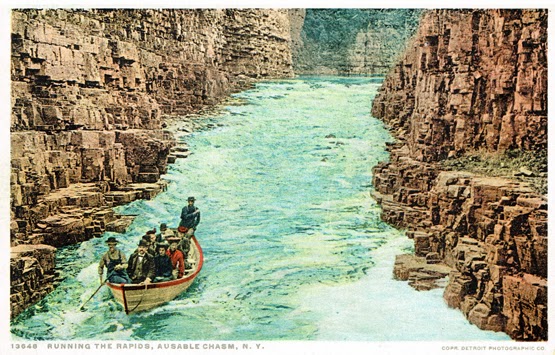 Ausable Chasm is a sandstone gorge tourist attraction near . The   runs through it, which then empties into . You gotta love the hats, ties and dresses worn for the river ride!

The catalog number on this Detroit "Phostint" postcard dates it as being published between 1909-1910. 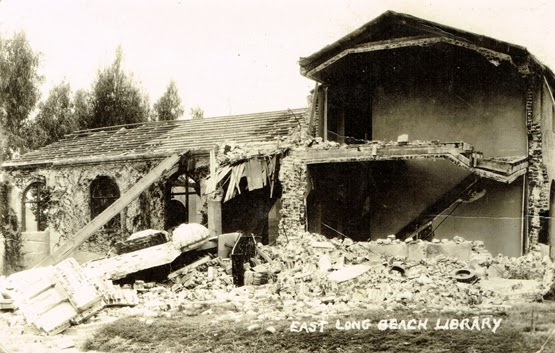 The  earthquake of 1933 took place on March 10, 1933 with a magnitude of 6.4, causing widespread damage to buildings throughout Southern California. An estimated fifty million dollars' worth of property damage resulted, and 120 lives were lost. Many of these fatalities occurred as people ran out of buildings and were hit by falling debris. 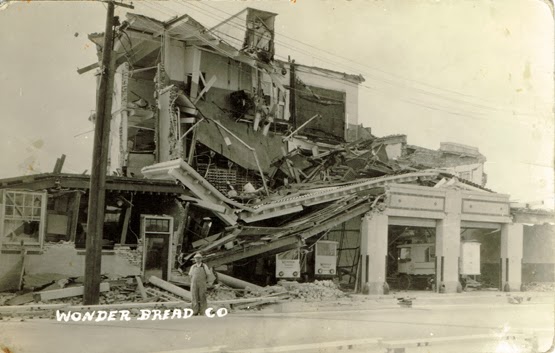 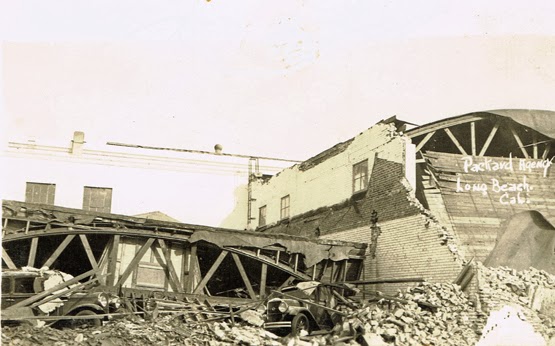 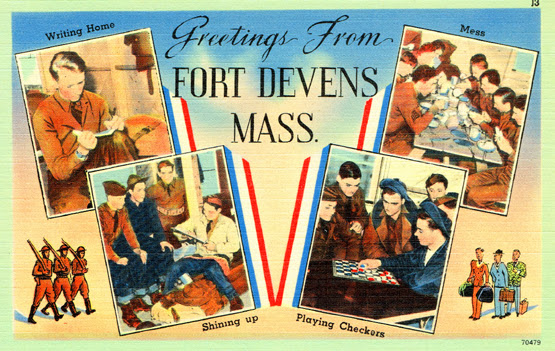 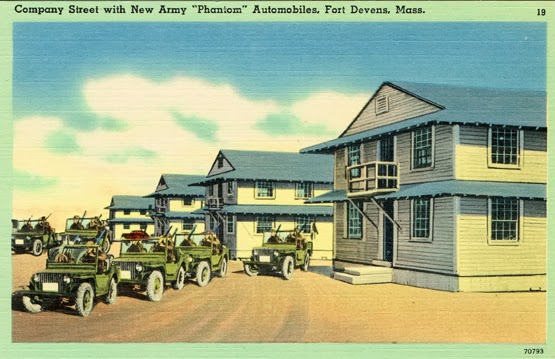 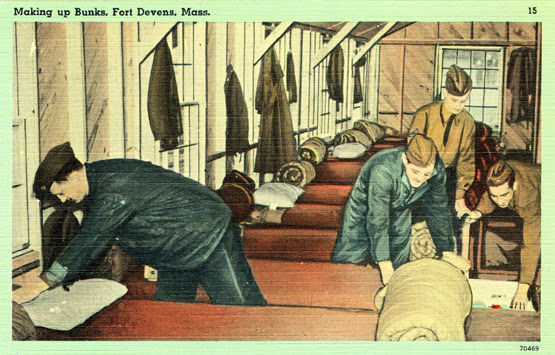 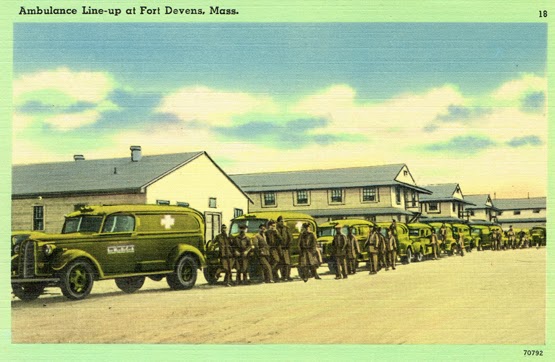