A colorful birds-eye view of in . I found some interesting items on this card, starting with the photographers credit to Ray Cresson, followed by two theaters, the Saenger and Lowes. 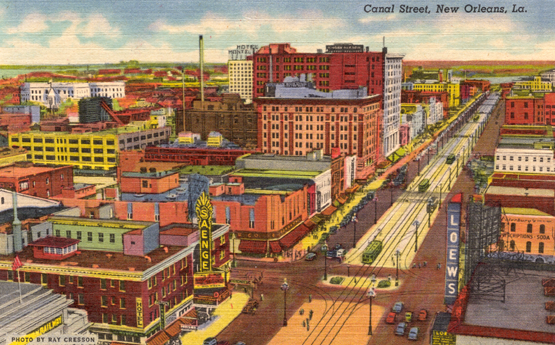 RAY CRESSON:
He first began dabbling in photography in 1938. Interrupted by World War II, his career would include more than 50 years as manager of the K&B Camera Center on Canal St. The store was a favorite of budding photographers. John Raymond "Ray" Cresson Jr. passed away on January 7, 2011 at the age of 92


THE SAENGER THEATRE:
Opened on February 4, 1927. The 4,000-seat theatre took three years to build and cost $2.5 million. The top ticket price was 65 cents, and the bill for each performance included a silent movie and stage play, and music from the Saenger Grand Orchestra. In 1977 the Saenger was designated a historic landmark by both the New Orleans Landmark Commission and the National Register of Historic Places. (Yea!)

LOWES:
Opened in 1927, it was run by Loew's until the 1960s. It then became an indie-run theater until 1980. The 2,300-seat theater has been sealed off for years, but now an arts group has the OK to move forward with their plan for a cultural arts center. (Yea!)


The back of the card reads:
"NEW ORLEANS  -  AMERICA'S MOST INTERESTING CITY"