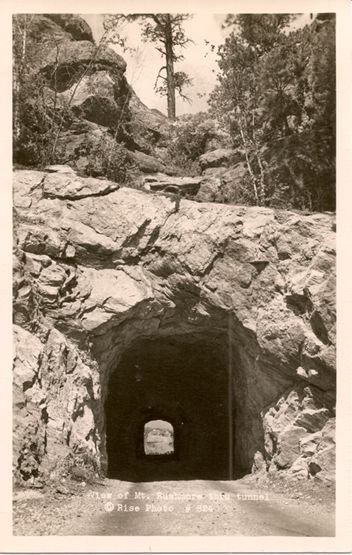 I didn't initially notice the unusual viewpoint of Mount Rushmore in this RPPC. Talk about light at the end of a tunnel! I've blown-up the "end-of-the-tunnel" below. 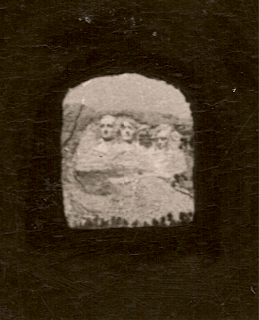 Here's something about Mount Rushmore that I had never heard, the Hall of Records...Located along the small canyon behind the Mountain Sculpture, the Hall of Records is an unfinished chamber which was intended a repository of the American Story. Construction of the hall took place between July 1938 and July 1939, when a 70-foot tunnel was blasted into the mountain. Work halted in 1939 when Congress directed that construction should be executed only on the faces. With sculptor Borglum’s death in 1941 and American involvement in World War II, all work on the memorial came to a close on October 31, 1941.

This chamber was to hold the documents and artifacts most central to American democratic history. The proposed room was intended to be very large, up to 80 by 100 feet was to be drilled into the north wall of the canyon.